Aside from film screenings, the 55th annual KVIFF also offers a rich accompanying programme and other events associated therewith. Among those you can visit today are a talk on the TV miniseries Suspicion at Czech Television House starting at 11 in the morning. The three-part miniseries is inspired by real events and is about the power of manipulation and influence of the media on public opinion. It does not seek to place blame, but instead investigates how truth differs from mere semblance. You have the opportunity to see the first instalment at the festival.

Two of today's events are tied to the new Czech film Stínohra. The first will be a talk at the innogy point on the Mill Colonnade at 1 p.m., and two hours later, at 3 p.m., the "Tea at Three" at Czech Television House again.

Every year, KVIFF organizes a special event as part of its No Barriers project. This year, you’ll learn to cook with chef Filip Sajler. The former star of the “Kluci v akci” TV show, who has even cooked for David Bowie and Madonna, will teach you simple tricks for creating excellent meals from basic ingredients in just a few minutes. See you at the Mlýnská kolonáda at 3pm.

At 5 p.m., the Pilsner Urquell bartenders on the Mill Colonnade will start running to commemorate the famous chase scene of Karlovy Vary waiters from the movie Waiter, Scarper!

The evening will belong to the pop-up club KAISER 55. Today the rapper Rytmus will perform outdoors in the Postal Court (Poštovní dvůr), to be followed by an after party in the adjacent buildings. Starts at 7:30 p.m.

Another of the popular KVIFF Talks will take place today, a meeting with directors, actors and other filmmakers, who present their work as part of the festival. Find out how original it is to film on a real moving train from director Juho Kuosmanen and actress Seidi Haarla at 3:30 p.m. in Hotel Thermal's Press Conference Hall. Kuosmanen's current work Compartment No. 6 received the Grand Prix at Cannes this year. The KVIFF Talk, which will take place in English without translation, will be moderated by film journalist Marta Balaga. 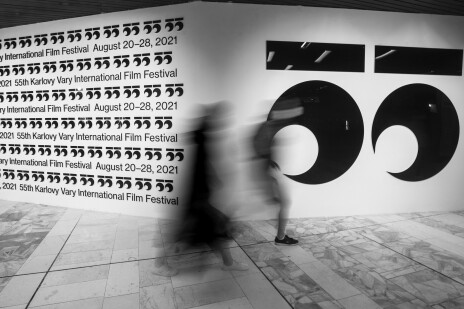