News The Finnish delegation on filming on a train

With his first film, Juho Kuosmanen won the Cannes section Un certain regard, with the second he won the Cannes Grand Prix, sharing it with Asghar Farhadi's new film A Hero. “And for some time, I had his award certificates at home because they gave us them wrong,” he revealed at the beginning of his KVIFF Talk.

The actress Seidi Haarla also answered questions from the Polish journalist Marta Balaga with him. She played a student on a train journey from Moscow to Murmansk in his film Compartment No. 6. In the compartment in the film’s name, she meets a young Russian she befriends, in spite of the initial antipathy. “It's not a classic romance, but rather a film about connecting, about finding someone who understands you. These two characters are soul mates, like siblings,” said Kuosmanen.

The filming was done in a real train, travelling during the day and standing still during the night. The director had to look at the action on a monitor in the adjacent compartment, because he did not fit anywhere else. "At the beginning, I gave instructions by banging on the connecting wall,” Kuosmanen recalled. What’s more, the actors spoke Russian, thanks to which, however, the director focused more on their body language.

Haarla improved her Russian for the film, though she knew a bit from her study stay in St. Petersburg in 2005. “Everyone told us not to shoot in Russia, but our Russian line producer put together a great crew that I would work with anywhere,” the director praised.

And you can watch the KVIFF Talk on KVIFF.TV. 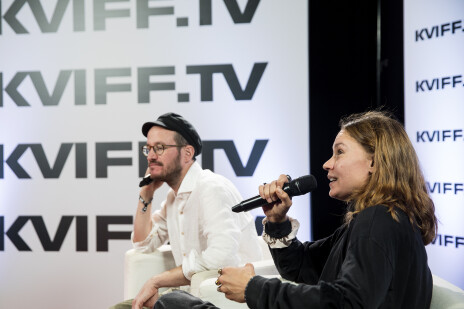