"The preparations already indicated that this film will be extraordinary and atypical. Icelandic filmmakers are not afraid to experiment and go against convention," is how Sandra Hezinová from the Karlovy Vary programming team got viewers in the mood for the screening of the film Lamb.

The film had its premiere in July at Cannes, and they even came up with a new Originality Award for it in the section Un Certain Regard. "After Cannes, the film started to be labelled as a horror, but that's reductive, the horror aspect is just one layer," noted Sandra Hezinová, who described the film as an unsettling drama from a lonely farm.

It's best to know as little as possible in advance about the work with Noomi Rapace in the main role, so neither director Valdimar Jóhannsson nor producer Hrönn Kristinsdóttir betrayed anything. "We're very happy that you invited us to such an amazing festival," Jóhannsson said in tribute to KVIFF. 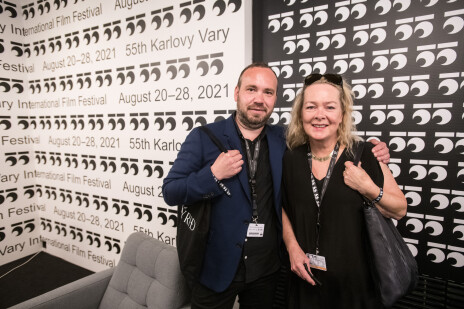