News Apples director: What we used to think of as sci-fi is suddenly real

Greek director Christos Nikou is helping decide on the winners of the Crystal Globe Competition as a member of the jury and is also accompanying his film Apples. Last year it opened the Orrizonti section in Venice, earning unanimous praise from both critics and audiences.

The work addresses the topic of memory and the loss thereof, whether real or feigned – the world has been hit by a pandemic, a side effect of which is amnesia. "What once might have seemed like science fiction is suddenly a quite real thing," philosophised Christos Nikou after the screening about how much a different pandemic, in this case the COVID one, has shaken up all of our lives. "In terms of context and understanding, the pandemic actually rather helped our film."

The main character becomes part of a special programme that is supposed to help him create a new identity. Equipped with a camera, he is tasked with filling his mind with new memories. It is on this protagonist that the camera focuses most of the time, which is in part connected to the fact that the film is shot in a 4:3 format. "We wanted to focus primarily on the main character, on his mood and feelings, his loneliness, and not the surroundings and world around," explained Nikou.

The title of the film is also symbolic in this regard. "For one thing there's the clear biblical level, but people also say that apples are good for your memory. And the title of the film has a personal level for me as well: my father would eat as many as eight apples a day, so my own memories of him are connected with apples. And then there's a kind of ironic meaning, which is that instead of storing memories in our own mind, we use a device that has an apple in the name and logo," Christos Nikou concluded with a smile. 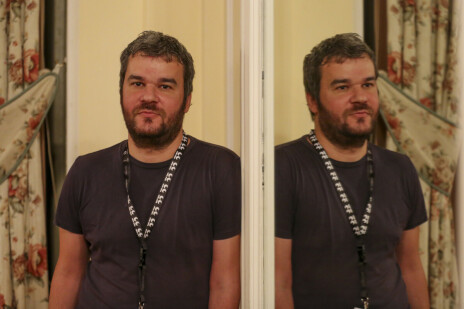