News The Ride returns to Karlovy Vary after 26 years

"When you have a famous father when you are starting out, you are carrying a name that means something. And you are expected to achieve, or even exceed that quality,” explained moderator Marek Eben when introducing the screening of the film Ride, adding that the director Jan Svěrák, the son of the famous actor and screenwriter Zdeněk Svěrák, succeeded.

The Oscar winner for the film Kolja will receive the Festival President’s Award at the closing ceremony of the 55th KVIFF for his contribution to Czech cinema. "I'm very flattered. It’s a retrospective award, but I will not take it as an incentive to retire, but rather as a sign that I deserved it and now I can just play around,” Svěrák said.

In honour of Jan Svěrák, the festival presented the film The Ride, which won the Crystal Globe in 1995. “You will be seeing the film from the same copy of the film that was shown here twenty-six years ago. I hope that you get a little feeling of the freedom and joy from when we shot it and that we, as youngsters, felt six years after the revolution,” the director exclaimed. 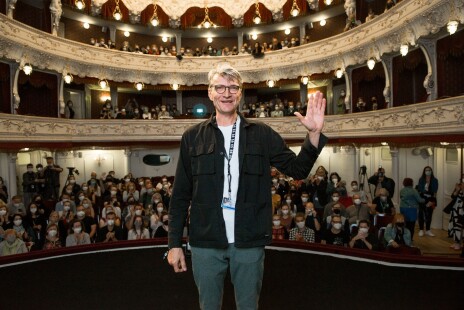