News Laurent Garnier does things for himself

How does renowned DJ and music producer Laurent Garnier see his own story? How does he see the history of techno, rave and house music? The film Laurent Garnier: Off the Record shows this, flying around the world with him and taking the audience to Chicago, Detroit and other places where it all went down.

"When they approached me about wanting to do a film about me, I said: not about me, but let's do something like a guide around the whole community," revealed Laurent Garnier during the fourth KVIFF Talk, which was led with him by Saša Michailidis at Hotel Thermal. Other pioneers of electronic dance music thus also appear in the film, for example Carl Cox, Derrick May or the French filmmaker and musician Quentin Dupieux aka Mr Oizo.

During the interview, Garnier did not however turn down questions about his person and the manner in which he approaches music and playing. Including a question about whether he isn't afraid that he won't recognise the right moment to stop playing. "I really hope I can recognise it. Or that I have enough good friends around me that they'll tell me honestly that it's time to stop," the French legend reacted with a laugh. He also said he doesn't prepare his sets ahead of time. "You can't. You can never know in advance what the audience's chemistry will be like, its mood, its energy – I choose the music based on that," he revealed.

Despite this – or perhaps for this very reason – music is primarily a personal thing for him: "I think playing for people is in my DNA. But at the same time, the things I do, I do mostly for myself, not for an audience or for someone else. That's the only way I can touch someone else, somehow reach them," Garnier explained.

And you can watch the KVIFF Talk on KVIFF TV. 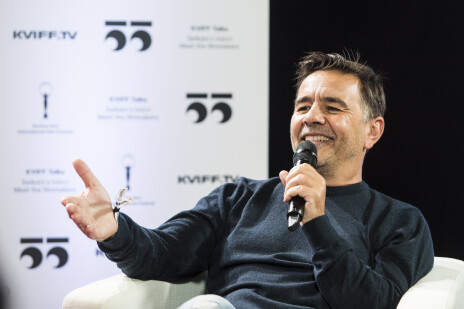