"Whoever doesn’t listen to rap can get a feeling for it. And whoever listens to it can get to know it even better,” stated Orion, one of the protagonists of RapStory, when introducing the online series. In addition to director Šimon Šafránek and other members of the film crew, a large group of rappers, such as Vladimir 518, Indy, Yzomandias and Smack, introduced the series at the KVIFF along with Orion.

The audience could see five out of the total of ten parts in the series, which follows the Czech rap scene from its pre-revolutionary beginnings to the present, all through the eyes of those who were there and managed to build a culture that says more about today than any other. That’s because rap is currently one of the most successful musical genres in the country, coming from a genre that was laughed at to almost become Czech pop music. “I think it will even go higher,” contemplated Smack (a winner of two Anděl awards in the past for his albums) during the discussion after the projection.

Šimon Šafránek continued: “Because rap is larger than life. Just like films are larger than life,” added the director and publicist, who also won a Czech Lion for his documentary King Skate. His latest work combines contemporary testimonies with unique archive footage, and his dynamic editing also draws attention. You will see RapStory in its entirety online this December. 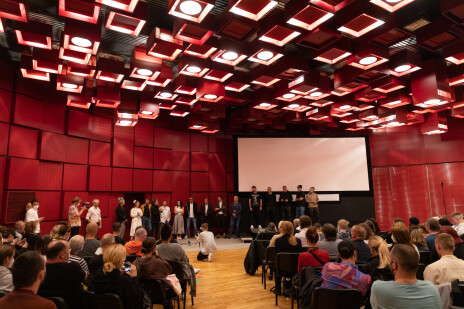