News Ethan Hawke about Tom Stoppard and starring with a dog

The last of this year's KVIFF Talks belonged to American actor, screenwriter, writer and director Ethan Hawke. Right off the bat, the moderator, British journalist Neil Young, asked him about working with the Czech-born award-winning playwright Tom Stoppard. "I was over thirty and I was entering a phase of a kind of disillusionment with life. And then I met Tom, who is so kind, witty and thinks on so many levels that you're exicted just to watch him," Hawke divulged, adding that his path to Czech culture was opened in high school by the books of Milan Kundera.

The discussion also turned to the film Dead Poets Society, which catapulted Hawke to fame in 1989. "Robin Williams, who was an icon at the time, was constantly making jokes on set, which really made me mad. I was a proponent of the Stanislavsky method at the time and I wanted to concentrate on my experience of the role. All the more did he focus his jokes on me, but I never laughed. I only figured out my feeling that he didn't like was wrong when he found me my first agent after the film," say Hawke, who is still working with the same agent today.

Neil Young also asked him about playing alongside Jack Lemmon in the movie Dad or a dog in the film White Fang. "When you're at a festival doing a photoshoot with a dog, you immediately realise who you really are. It's ahumbling experience. If I ever taught acting, I would definitely arrange a lesson with an animal," the famous artist stated. 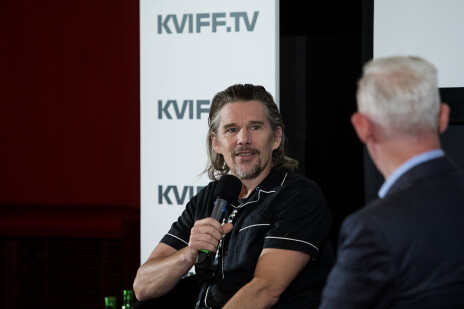