Twenty-six years after his Crystal Globe for the film The Ride, Jan Svěrák received a Festival President’s Award from the Karlovy Vary Festival for his contribution to Czech cinematography. “I don’t know exactly what I contributed to Czech film, but I know exactly what Czech film contributed to me. A lot of passion, joy, emotion. Friends, colleagues and audiences, all of them together for me make up what we call Czech cinematography. I’m glad that I can take the prize from a wise and kind President. Not all festivals, nor even some countries, have such a President,” stated the director after accepting the statue from Jiří Bartoška.

At the end of the ceremony, Ethan Hawke also came up for his President's Award. "It's a great honour to be here with you. When I asked Richard Linklater what he knew about this festival, he told me that what separates this from other festivals is the audience, which really loves film. I saw and felt the same thing here, as well. The Czech culure community is intelligent and inspired me as an artist. I want to share this award with a person who is my artistic partner, my wife Ryan Hawke, who produces the films in which I act and who reads all my scripts. I love you," exclaimed the American actor, screenwriter, director and writer. 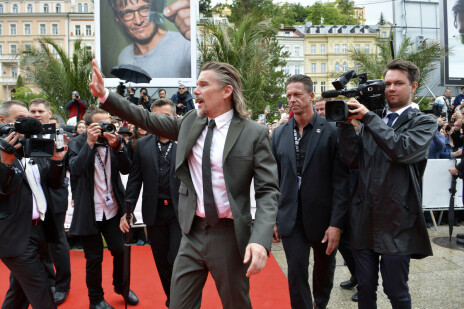