News PSH in a light and existential form

The members of the Czech rap band Peneři strýčka Homeboye, accompanied by a large delegation of filmmakers, presented their documentary PSH Neverending Story to the sold-out Small Hall. "The film is not just about graffiti and rap, but also about different forms of male friendship. In a way, it is a deconstruction of their fame," said host Aleš Stuchlý. Director Štěpán FOK Vodrážka thanked the band for going all out in the filming. Screenwriter Petr Cífka said that the project began as a humorous nostalgic narrative but ended as an existential drama. "Yet, still with hints of comedy" added producer Vratislav Šlajer.

The film received thunderous reactions from the audience and a standing ovation at the end of the screening. A discussion with filmmakers and rap legends followed. "The first idea came about when I watched a documentary about the Beastie Boys at home and thought it would be nice to make a similar movie with a Czech band who like to talk. PSH came to mind as the best choice," Cífka recalled how the project begun. "The first time I saw it, I was horrified. Then I realized I couldn't be angry with the filmmakers – I should have lived differently. Not all we’ve been through was happy, but I think that is what a music documentary should reflect. It should hurt a bit," concluded Vladimir 518. 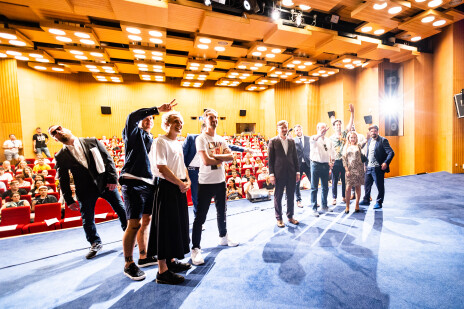