Debuting director Alejandro Loayza Grisi presented Utama, the big winner of this year's Sundance Film Festival, at Pupp Cinema on Saturday 2 July. The minimalist narrative set in the arid Bolivian highlands follows an elderly Quechua couple’s daily struggle with drought and old age. “Climate change is a serious problem for Bolivia. Some parts of the country are expected to turn into a desert within 15 years,” the filmmaker said at a talk after the screening.

The protagonist pair are amateur actors speaking both Quechua and Spanish. “We were looking for people who could identify with the story. The acting rehearsals took three months and were partly led by an acting coach who taught them how to improvise, gesticulate and shout,” Grisi told the audience. But the audience was also interested in the llamas, or rather in how to get these animals to cooperate during the filming. “Llamas are very smart and beautiful animals. When we were doing the same shot for the fifth time, they already knew where to go and what to do,” laughed Alejandro Loayza Grisi.

Utama will be screened three more times at KVIFF, for example on Sunday 3 July in the Small Hall of the Thermal Hotel and on Thursday 7 July in the Karlovy Vary Municipal Theatre. 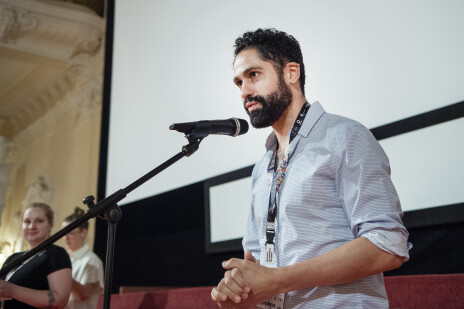