When introducing the film Beautiful Beings, host Sasha Michailidis invited the audience to greet their neighbours "may the film be with you!" to celebrate the possibility of meeting each other in person and without restrictions. Next, he recalled the words of the festival’s artistic director, Karel Och, that the pandemics was probably the reason why more films about love were selected this year. "This is not the case of this one, though," Michailidis warned the audience, referring to the fact that tender feelings are essentially lacking, rather than abundant, in this harsh drama about the reverse side of adolescence.
​
While it is primarily an Icelandic project, Czechs were involved, too. The audience at the Čas Cinema thus had the opportunity to meet co-producer Pavel Strnad and visual effects expert Michal Křeček from Magic Lab. "A couple of years ago, we tried to co-produce another film, which you might have seen – A White, White Day directed by Hlynur Pálmason. It didn't work out, but instead we received this screenplay. I said that we definitely wanted to make the film, and we managed to find financing, also in the Czech Republic. Unfortunately, the filming took place under the pandemics, so we could not really collaborate as everything was Zoomed. We actually met the director in person only at the Berlinale premiere," Strnad explained the complicated making of the film. 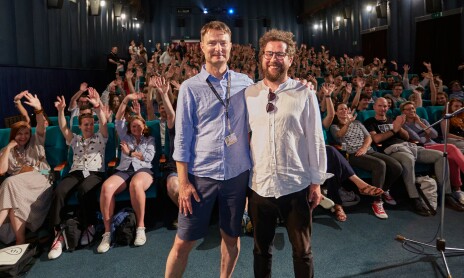