“I was a Buddhist on Tuesday, and I was into Nietzsche by Friday,” says David Bowie in Moonage Daydream, a unique documentary presented by director Brett Morgen in the Grand Hall on Saturday before midnight. “There have been 27 books written about Bowie and he has a Wikipedia page, so anyone can find his biographical data there,” he told the packed Grand Hall before the screening. “But Bowie can’t really be defined, he can only be experienced.”

“David first spoke to me when I was 12 years old and he taught me to see the world through a different perspective,” Morgen revealed about his idea to link the film to his own perception of the brilliant British artist. The American director spent two years just going through Bowie’s archival footage, and another five years creating the film’s sound design. He dedicated the screening of Moonage Daydream to Czech filmmaker Vojtěch Jasný, who taught Morgen at New York University. “He would walk around the classroom with the camera, putting it in different places and in this way, he taught us to see things from different perspectives – in a Bowie-esque way,” recalled Morgen.

See the additional second screening of the Cannes hit on Friday 8 July at 11 p.m. in the Grand Hall. 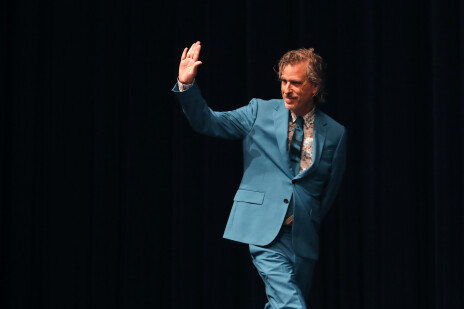