News Lullaby as a sensitive portrayal of family life

The Spanish director Alauda Ruiz de Azúa presented Lullaby, an empathetic debut focusing on the family and the life cycle within it, in the Small Hall. ‘The film shows that to understand who we are, we need to look into our family,’ she told the audience.

She revealed that the making of the film was primarily dictated by the smallest children. ‘We had five different babies on the set and the scenes were based on their behaviour: if a baby cried, we would build the whole situation around it,’ the first-time feature director explained.

This sensitive portrayal of the life of an ordinary Spanish family is partly autobiographical. ‘When I became a mother six years ago, I was going through a lot of intense changes. The biggest one was that suddenly, I saw my parents in a completely different light,’ Ruiz de Azúa said. ‘Even if you don't have children, you can still understand the film. We all realise that we are a solid part of our family, even if our mutual relations are far from perfect,’ she concluded. 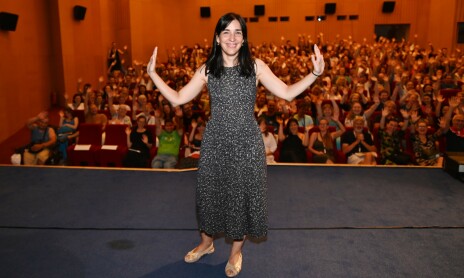