News Liev Schreiber on his love of theatre and planting sunflowers

Actor Liev Schreiber was interviewed by Scott Feinberg at the packed Thermal Conference Hall, reminiscing about his life and career milestones during this year's first KVIFF Talk.

As a child, Schreiber played bass clarinet, danced, and wrote an extensive paper on why dogs bark at high school. He didn't consider acting a sensible career choice, and although he graduated from the Yale School of Drama, he was preparing for work in other fields. "Studying drama was fun, but I thought it was all just a joke," he says, summing up his feelings at the time.

He reportedly accepted one of his most famous roles in the meta-horror film Scream just for the money – the pay was definitely higher than in theatre. Led by Feinberg’s questions, Schreiber recalled the most notable works of his career, such as the biographical drama RKO 281, where he portrayed Orson Welles (after which everyone told him he should also direct), the war thriller Defiance, and the Oscar-winning Spotlight. His career was further influenced by Hugh Jackman, who inspired Schreiber to start workouts, which in turn brought him roles of masculine tough guys in several films. For his directorial debut, Everything Is Illuminated, he even had a sunflower field the size of two football pitches planted.

His most notable TV role was in the Ray Donovan series between 2013 and 2019. The actor's primary concern was to secure a permanent job in Los Angeles so that he could be near his then-partner Naomi Watts. When the family wanted to move to New York after a few years, the production of the series moved there, too.

In the final part of the Talk, Schreiber presented the BlueCheck initiative, which he described in more detail at yesterday's press conference. The full KVIFF Talk with Liev Schreiber is available on KVIFF.TV. 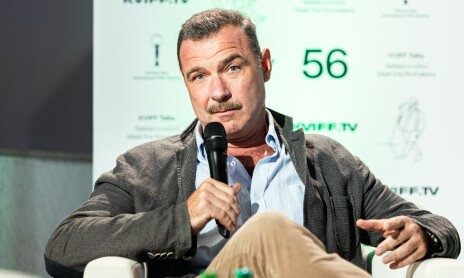