The winning film of this year’s Palme d’Or from Cannes, Triangle of Sadness, was presented at the KVIFF by Croatian actor Zlatko Burić. ‘In the 1960s we loved Czechoslovak films, which inspired me deeply. I am happy to now present our film to the Czech audience,’ he told the full Grand Hall.

The new film by the successful Swedish director Ruben Östlund, made in an international co-production, was shot in Greece and Sweden at the beginning of the pandemics. ‘It was a challenge – I had to undergo over 900 nasal swabs,’ the actor joked to amuse the audience.

The wild satire from the world of modeling, a luxury yacht and a seemingly deserted island had its Czech premiere at KVIFF. ‘The film is a unique blend of excellence, artistic language and entertainment. I hope this will be your impression as well,’ Burić wished the audience before the screening. 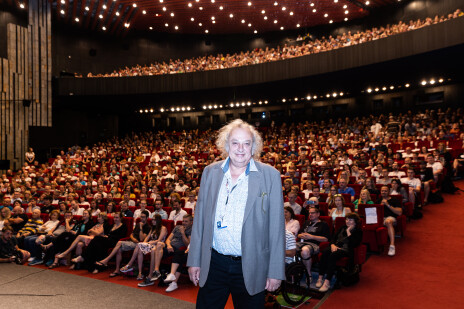