News The Gregors and their quiet film revolution

The Drahomíra Cinema hosted a screening and Q&A with the delegation presenting The Gregors – Come With Me to the Cinema. The protagonists of the German documentary indeed introduced discussions about films as a special format and have brought many other changes to film festivals, such as the inclusion of films about sexual minorities or midnight sections. ‘Follow the sources of your inspiration and never mind the market too much,’ film historian Ulrich Gregor, now aged 89, advised the authors. ‘The most important thing is to motivate filmmakers to create,’ added his wife Erika.

Over the past sixty-five years, the Gregors have screened tens of thousands of films at the Arsenal Cinema in Berlin, excerpts from which were part of the documentary. Their entire collaboration was characterized by the emphasis on dialogue. ‘Contact with the audience is essential – that is why the audience is there. Vibrations do exist. People should visit the cinema as a social event as well – to interact, debate, share their experience,’ Gregor said.

‘In the 1970s and 1980s, it was almost impossible to watch other than mainstream films in Czechoslovakia,’ said Jan Kerhart, the documentary’s cinematographer and a Czech native. ‘We envied Germany for having the Gregors”. Editor Silke Botsch added that she had composed the unique portrayal of the film enthusiasts from more than 200 hours of material and footage of more than 90 films. 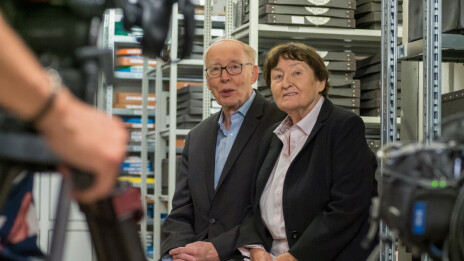