News A love triangle in an explosive documentary

At Pupp Cinema, director Sara Dosa presented her film Fire of Love, about a volcanologist couple sharing love for volcanoes. The documentary about Katia and Maurice Krafft, who have described many active volcanoes especially in the 1970s and 1980s, was made in less than two years during the pandemics. ‘As a child, I was afraid of volcanoes. But then I got to visit Iceland, and instead of the fear came fascination with the volcanic activity. They are extremely powerful phenomena,’ the director described her relationship to the topic of her film.
​
‘I was working on a film about Iceland and while searching for materials in the archives, I first came across Katia and Maurice. Their footages were often breathtaking. The more I delved into it, the more they fascinated me as people, including their philosophy of life, their sense of humor, and their immense love. I sort of wanted to capture the love triangle of Katie, Maurice and the volcanoes,’ the American filmmaker explained the details of the documentary. In preparation of the film, she went through around 250 hours of material from the Kraffts’ archives and dozens of hours of their TV appearances.

Her fascination with volcanic phenomena apparently did not end with the finished documentary: 'This morning I thought how interesting it would be to make a film about the eruption of the Krakatoa volcano in 1883, which changed the whole world,' thought the director. 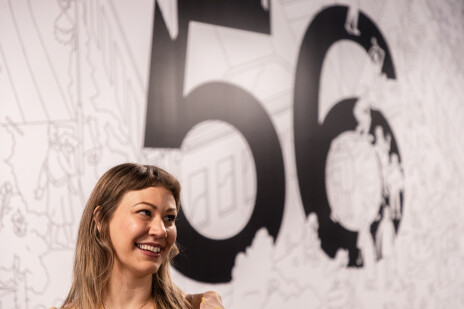