Two premieres in a row were held at the Small Hall on Monday. The first was Level 34, a short science fiction film by a 16-year-old Zach Breder, who always wanted to make a movie. The dream of this American, who suffers from a severe heart defect, came true thanks to the Make-A-Wish Foundation. The Pinewood Film Group was happy to take over the production, students of the local film university formed the crew, and Czech company UPP made the post-production. ‘You guys are incredible. I could have never made this film without you,’ he enthusiastically thanked his supporters and the audience. He revealed he had been inspired by films like Star Trek, Star Wars and National Treasure. His next film should narrate the story of the first female heart surgeon.

The documentary My Sister Liv was presented by Grammy Award-winning director Alan Hicks. ‘Each of my films relates to music in one way or another. That is how the story of a young musician whose life ended tragically came to me,’ he explained the origins of his work. The intimate letter to a sister who had struggled with depression all her short life required a very sensitive approach, he explained. ‘I wanted to make sure no one was hurt,’ Hicks said. ‘We hired therapists and experts who went through every scene with us.’

Both films were screened in the People Next Door section, which focuses on disabled people and is supported by the Sirius Foundation. 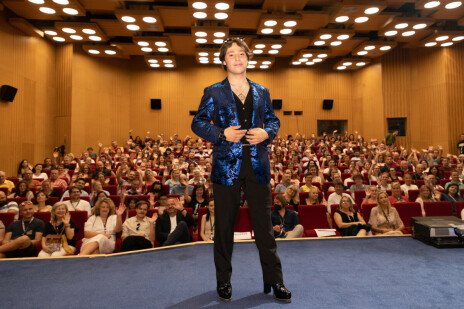