News A universal story from the Ukrainian border

The Čas Cinema screened the co-production film Pamfir, set on the Ukrainian-Romanian border. The visually impressive drama was introduced by producer Aleksandra Kostina, who also excused the absence of debuting director Dmytro Sukholytkyy-Sobchuk, who was unable to attend the festival for obvious reasons. “Maybe the film will enable you to find out what kind of country Ukraine is, what Ukrainians are like and why they are fighting for their freedom,” Kostina said, suggesting broader levels of interpretation of the work.

“Even though it is a locally limited story, it deals with universal themes such as family, relationships, boundaries – not only geographical boundaries, but also human ones. And what we are capable of when someone crosses those boundaries,” the producer explained. One of the distinctly regional elements is the Malanka festival, similar to the Slavic carnival or Mardi Gras: “This is a very important pagan tradition in this region, as boys become men. Only men participate in these initiation rituals and they come here from all over Ukraine and abroad.”

It is worth mentioning that this was the film debut for all three central actors, and they prepared for it very diligently – they lived their characters’ lives, went to their jobs and lived in their houses. “In the end, the film managed to have everything the director had wanted,” Kostina summed up. 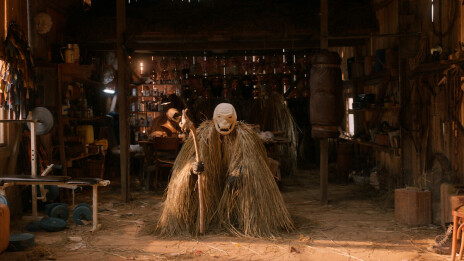