After the end of Klondike, a gripping drama about the beginning of the war in Ukraine in 2014, an oppressive silence fell over the Čas Cinema. The film, which won an Sundance festival's Directing Award was introduced by director Maryna Er Gorbach and a discussion followed. “I came here to hear your views on Ukraine,” she said into the silence, which was broken only by a thank you from one of the spectators, who said he had trouble watching some of the scenes.

“I’d rather not have reasons to make such a film at all. But there are reasons, and we have to talk about them,” the director said of the war film, which in minimalist, almost western scenes reveals destruction, hatred, but also a strong theme of impending motherhood.

What connects the Ukrainian Donbas to the place infected by the gold rush to which the film’s title refers? “Symbolism. We wanted to be universal and use the art of film to tell stories about ordinary Ukrainians,” the director replied. The script was written starting from the end of the story, with the riveting lead role played by theatre actress Oxana Cherkashyna. “There would be more of us from the staff here, but some of us are fighting and some of us are scattered around the world,” concluded Maryna Er Gorbach and received a long applause. 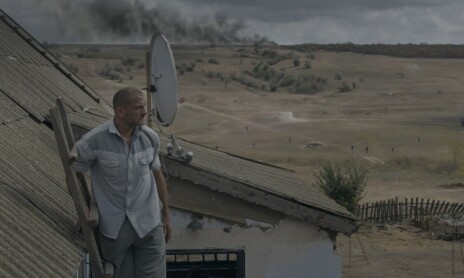