News The authors of Rubikon created their own space station

A packed Small Hall watched the pure-blooded sci-fi Rubikon, in which a small group of characters must cope with life-threatening circumstances aboard a space station. “I’ve loved science fiction since I was about five years old,” said director Magdalena Lauritsch during the discussion that followed. She seems to have very positive memories of the shoot: “We worked out everything in detail when we were building the station and it was the best time of my life – when do you get to make your own space station?”

“Even though it was her debut, the director knew exactly what she wanted and how she wanted it to look,” actor Mark Ivanir described the action on set. “The story is special because we started filming it during the pandemic. It’s about three people who are kept together in a kind of quarantine. At that time, Vienna was actually in a similar situation. The story is set in space, but it’s rather about family and how to bring and keep a small group of people together.”

At the end of the discussion, which was also attended by actors Julia Franz Richter and George Blagden and producer Loredana Rehekampff, the filmmakers invited other members of the crew to the stage. The number of them clearly proved what a passion project this was for all of them. 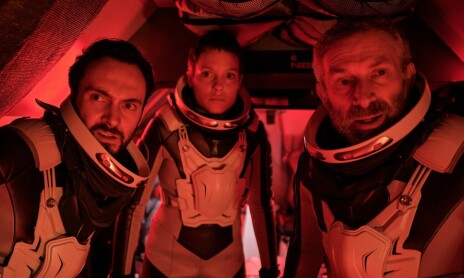