News Reflection of the horrors of the Ukraine war

For Valentin Vasyanovych, Reflection was a truly major project – he was the director, scriptwriter, producer, cinematographer and editor. The film premiered last year in Venice and now was presented by the author and actress Nika Myslytska to the audience at the Small Hall in Karlovy Vary. Like is his previous film Atlantis, war is the main theme – this time the Russian invasion of Crimea at the end of 2014. Many of the captured Ukrainian soldiers went through cruel torture.
​
‘The idea for the film came to me when our people who had been through this hell started coming back. Ukrainian writer Aseyev, who had been detained and tortured for two years, was of the greatest help. We kept in touch during the shooting,’ the director described the making of the film. Yet, he says he cannot imagine making a film about the current war events: ‘Witnesses say what is happening now is much worse than back then.’

Vasyanovych also explained his style, composed of long, full-frame shots with minimal use of close-ups: ‘This is the third film I have made in this way. I show the whole scene and let the viewers choose what they want to focus on. So I basically leave the film inedited and invite the audience to make their own editing.’ 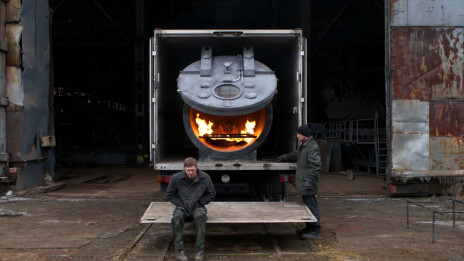