News The whole world on a Swiss Îlot

Swiss director Tizian Büchi has presented his film Like an Island, the winner of this year’s Visions du Réel festival. ‘Urban nature is magical for me,’ he explained the stimulating combination of observational documentary and magical realistic fiction when introducing the film to the first audience outside Switzerland. ‘I like mingling reality and fiction, blurring the lines. My own imagination is usually not enough for making a story, so I look for inspiration in real world’.

The audience immediately warmed to the two watchmen, whose exact task remains a mystery: ‘No professional actors are among the cast. Daniel was originally a bus inspector in Lausanne. He has authority, charisma, and the ability to make people feel comfortable even when he’s giving them fines. He plans to return to his native Congo. Ammar, the other character, was my roommate for three years. He first wanted to become an actor, but then he decided to take up a purely Swiss profession of a cheesemaker,’ Büchi revealed details about the film heroes.
​
It’s worth noting that the director didn’t write any dialogues. All the lines in the film were improvised by the actors, turning around specific topics. This gives the film a touch of authenticity despite its mysteriousness. 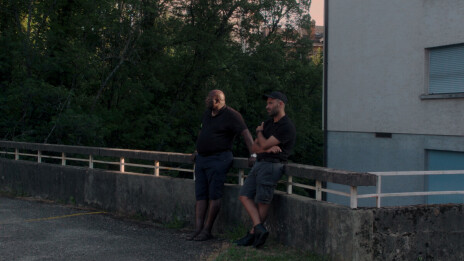