News The premiere of the film BANGER. was also attended by Czech rap stars

One of the largest delegations at this year’s KVIFF presented the adrenaline ride filled with rap and drugs, the film BANGER. The world premiere of Adam Sedlák's second feature film was attended by the protagonists Adam Mišík and Marsell Bendig, together with actress Anna Fialová and almost the entire crew.

Sergei Barracuda, who played one of the principal roles in the film, and Dollar Prync, who shared the stage with Oliver Torr, the creator of the film’s musical component, represented the rapping scene.

“The adventure began a year ago, and today, a substantial part of it is coming to an end,” recalls producer Jakub Jíra. The screening started close to midnight with Adam Sedlák’s introduction: “The film is 105 minutes long and it is quite late already. So come and enjoy it.” 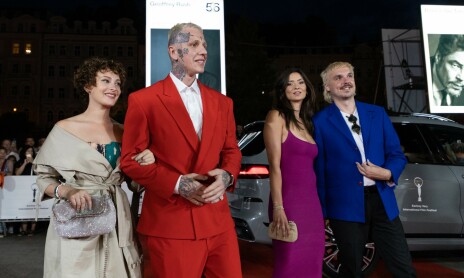