News Big Opening in the Grand Hall at the great festival

“The impact of a premiere at the Karlovy Vary festival on a film’s release is often underestimated,” said Saša Michailidis when introducing Big Opening by director Miroslav Krobot. The comedic probe into the theatre backstage and the world of emerging and fading relationships was originally to be named after the main character, the director and actor Šnajdr, who is striving to leave a mark in the world of theatre. “But then the filmmakers were invited to the festival and the name was changed to the Big Opening. Only later did they find out that the premiere would take place in the Grand Hall,” he revealed with a smile.

In addition to the stars of Dejvice Theatre including Pavel Šimčík and Klára Melíšková, Iva Janžurová was also present at the screening and was greeted by thunderous applause. “Let’s see how you applaud when you hear what comes out of her mouth,” Michailidis remarks. The large delegation also included actress Jenovéfa Boková and actor Jakub Žáček, and the guests were joined by co-writer Lubomír Smejkal, sound engineer Dušan Kozák and producer Ondřej Zima. 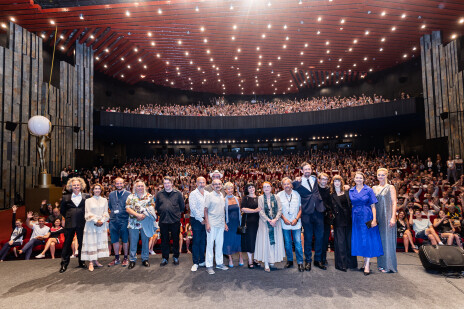