News Geoffrey Rush celebrated his birthday with the King’s Speech

Oscar-winning actor Geoffrey Rush introduced The King’s Speech at the crowded Grand Hall. “The script literally landed on my doorstep in Melbourne. I got it from a neighbour who told me there was an interesting Australian character,” Rush recalled of the making of the film. “Originally, it was a play, but I thought it could make a very good film if you could cut a lot of the supporting characters and focus on the relationship between a member of the royal family and a speech therapist from a colonial country.”

“Colin Firth and I were worried that it wouldn’t be attractive for the audience to watch long, chatty scenes with two middle-aged men, one of whom stutters and the other is Australian,” said a good-humoured Rush, who came dressed in a stylish shirt brimming with Australian motifs. “It turned out to be a low-budget film that had an impact on people. It was described as a feel-good movie.”

The actor then bowed to the interpreter, not knowing that the festival’s executive director Kryštof Mucha and artistic director Karel Och had one more surprise for him. July 6 is Rush’s birthday, so the audience sang Happy Birthday to him. 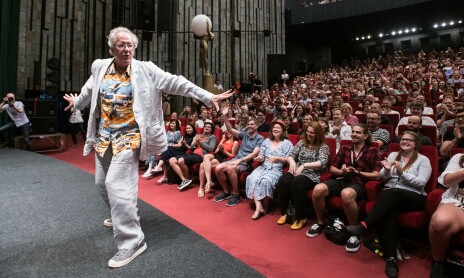