The dramatic story of Hanč, Vrbata, but also of the Czech-German sporting legend Emmerich Rath came to the packed Pupp Cinema. For its creators, The Last Race was mainly about battling inclement weather. “The weather was bad for seventeen out of twenty shooting days at the Labská bouda hotel,” said director of photography Jan Baset Střítežský. “I am not exaggerating when I say that the weather was so harsh that it would have killed Czech cross-country skiers.” This provided the filmmakers with authentic but also challenging conditions.

The shooting benefitted from an interesting paradox – while the recent pandemic brought nothing but trouble to other film festivals and filmmakers, it was great for the filming of The Last Race. “Due to the Covid-related restrictions, we caught the Giant Mountains totally devoid of tourists and could film them as they would have looked like a hundred years ago,” explained director Tomáš Hodan. This did not make it any easier for the actors to use the historic skis, though. “They must have skied over 50 kilometres,” said producer Ondřej Beránek, referring to the famous Jizerská 50 race. “However, the wardrobe assistants were the busiest of the film crew, as they shadowed the actors to take off and put on their winter jackets,” added producer Martina Knoblochová.

The large delegation included actress Judit Bárdos, actors Marek Adamczyk and Vladimír Pokorný, and snowboardist Eva Samková. The screening was opened by Petr Dvořák, Director General of Czech Television. “I hope that you experience the feeling of whistling wind, falling snow and all that the racers had seen,” he said. 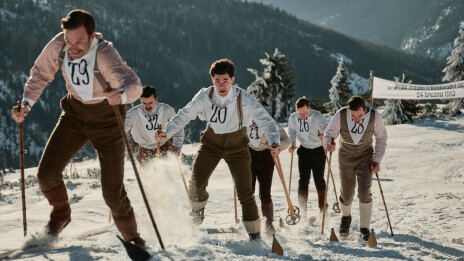