News Winners of non-statutory awards have been announced

Two Czech representatives, the drama Borders of Love and the documentary Art Talent Show, scored points at the journalistic FIPRESCI jury at the 56th KVIFF. The Ecumenical jury was impressed by the Bulgarian-German documentary Provincial Hospital and the Europa Cinemas Label jury by the Polish drama Fucking Bornholm.

The International Federation of Film Critics Jury awards two FIPRESCI Prizes to films from the Crystal Globe Competition and from the Proxima Competition that best promote film art and encourages new and young cinema.

The FIPRESCI award for the best film in the Crystal Globe Competition:

„For its deep, funny and tender portrayal of the complexity of interpersonal relationships, love and sexuality.“

The FIPRESCI award for the best film in the PROXIMA Competition:

“For its humour and unique style in the process of evaluating and creating art.”

Since 1994 the Ecumenical Jury has awarded films from the Crystal Globe Competition that display high artistic quality while questioning social, political, ethical, and spiritual values. It promotes directors who emphasize the search for truth, justice, and hope in accordance with Christian Gospels.

"A powerful documentary set at a provincial hospital in western Bulgaria during the time of the Covid pandemics. In a very honest observation, the directors capture situational fragments depicting the full spectre of life. The jury appreciates how this film portrays the hospital staff’s ability to share their presence and hope, as well as to fulfil their duties with unique strength and even humour, despite the obstacles arising from the hospital’s limited resources and the suffering caused by the disease as such."

"FUCKING BORNHOLM is a strong investigation into complex human relationships. The movie is showing the severe struggle of the protagonists trying not to drift apart from each other. They are dealing with the complexity of human nature. We all seem to have an idea of this joyful idyllic place for a summer holiday, called Bornholm, but it turns out to be a completely different experience. FUCKING BORNHOLM is this passionate encounter of expectations of enjoyment and challenging reality. The director Anna Kazejak gives multi-layered personality to the main characters, and at the same time portrays them in a compassionate way. Humour is cleverly worked in and narrative twist and turns in the storyline make the movie surprisingly interesting up until the very end. As cinema exhibitors, we particularly appreciate this excellent European film done for the big screen, as it is shot in a beautiful scenery and the compelling and powerful music is nicely supporting the story. We hope that spectators all over Europe will enjoy the movie as much as we did!" 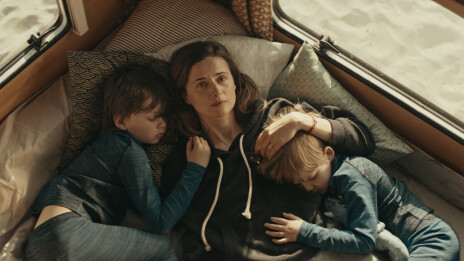