What would happen to the world we know so intimately if humanity suddenly vanished? Nikolaus Geyrhalter poses this question as he locates his latest movie in the abandoned and still prohibited zone surrounding the Fukushima nuclear power plant. Today the once thriving city, evidence of Homo sapiens’ ingenuity, is again furtively yielding to the inexorable power of nature.

What would happen to the world as we know it if people suddenly vanished? This is the central question Nikolaus Geyrhalter asks in a new work that delivers a philosophically powerful and visually mature statement on the nature of our civilization and the transience of humanity (without ever showing one living person). The prohibited zone surrounding the Fukushima nuclear power plant dominates the abandoned areas that were once vibrant environments serving life’s spiritual, leisure-time, and educational needs. But today’s derelict urban structures, industrial halls, hospital corridors, and entertainment centers offer none of this. Now the once thriving city, evidence of Homo sapiens’ ingenuity, is yielding to the silent, inconspicuous, yet inexorable power of nature. Comprised of quiet, static shots, the meditative picture provokes our contemplation of the fragility of our civilization, where not even the world’s most dynamic economies are excluded from time’s inevitable verdict.

Nikolaus Geyrhalter (b. 1972, Vienna), director, DOP, and screenwriter, founded NGF (Nikolaus Geyrhalter Filmproduktion) in 1994. He gained recognition with The Year after Dayton (Das Jahr nach Dayton, 1997), screened at Berlin and Venice, which focuses on the inhabitants of Bosnia after the end of the Yugoslav Civil War. Then came Pripyat (1999), about those who chose to remain in the contaminated zone at Chernobyl, followed by Elsewhere (2001) and the documentary Our Daily Bread (Unser täglich Brot, 2005) on the industrial production of food, which received a Special Jury Prize at IDFA. A later work, Abendland (2011), submits a portrait of nighttime Europe. In 2003 Nikolaus Geyrhalter accepted the Austrian State Award for Film Art. 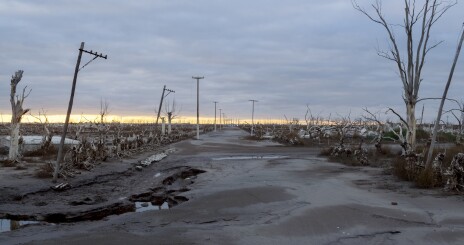