1902, an archipelago off the south-east coast of the US. This film project, ten years in the making, about the African-American Gullah culture does not offer a classic over-arching story, but rather the lyricised feelings and memories of a victimised but undefeated culture, and artistically engrossing scenes from life.

At the turn of the 20th century, the members of the Gullah culture, descendants of African slaves, remained cut off from the nearby shores of South Carolina and Georgia on a strip of islands. This isolation brought about an original and peculiar Afro-American culture that has endured until today. Even in everyday life, the memories of the community members retain everything that their ancestors brought with them from Africa. The film Daughters of the Dust follows a family from one early evening in 1902 that appears to be meeting for a final dinner the day before several of them leave for the north. Just as the role of narrator is assigned to an unborn child, the long-since departed ancestors are as much a presence in the film. This film project by director Julie Dash, ten years in the making, does not offer a classic over-arching story, but rather the lyricised feelings and memories of a victimised but undefeated culture, seen in breathtaking film images, and artistically engrossing scenes from life.

Julie Dash (b. 1952, New York), the first female African-American to have her film debut Daughters of the Dust distributed throughout the United States. Dash studied film and television production at UCLA and film production at CCNY. She has filmed music videos, among others for Tracy Chapman (nominated for a Grammy). She directed one of the stories for the television series Subway Stories produced by actress Rosie Perez and director Jonathan Demme. Among other activities, Julie Dash lectures at distinguished American universities (Harvard, Yale, Stanford and Princeton). 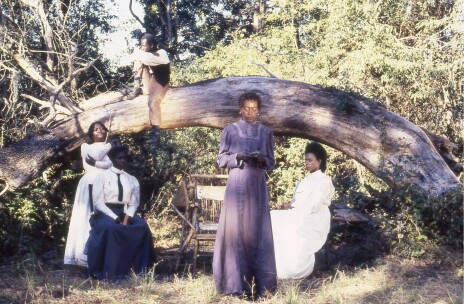