The Crystal Globe for Best Feature Film at the 53rd Karlovy Vary International Film Festival went to the new film by recognised director Radu Jude, entitled “I Do Not Care If We Go Down in History as Barbarians”. The film, made in the co-production with the Czech Republic, among others, reconstructs a ghastly incident and ingeniously updates Hannah Arendt’s incisive work on the banality of evil. Employing an uncompromising narrative form à la Godard, it demonstrates that committing brutal acts is not the only path to barbarism, for even a mere stunted conscience is enough to lead a person to it. “As we are in the Czech Republic and my film was made with the Czech co-production, I would like to thank all the Czech people involved, primarily Jiří Konečný”, said Radu Jude.

The jury, consisting this year of Mark Cousins, Zrinka Cvitešić, Marta Donzelli, Zdeněk Holý and Nanouk Leopold, awarded the Special Jury Prize to Sueño Florianópolis by Argentinian director Any Katz, a humorous and melancholic movie, for which also Mercedes Morán received the Best Actress Award. The Best Actor Award went to Moshe Folkenflik for his part in the Israeli film Geula. ​Olmo Omerzu, born in Slovenia and currently living in the Czech Republic, was selected to receive the Best Director Award for his road movie Winter Flies.

The Grand Jury also awarded two Special Mentions, one for the Russian co-production film Jumpman and one for the Slovenian co-production film History of Love. The East of the West Award went to a distinctive debut by Elizaveta Stishova Suleiman Mountain, an original account of the life in Kyrgyzstan. Special Jury Prize in the East of West Competition was granted to Hungarian film Blossom Valley. The new film by Vitaly Mansky Putin’s Witnesses, also made in co-production with the Czech Republic, won the Documentary Films Competition. The Documentary Special Jury Prize was awarded to the film Walden.

Barry Levinson was happy to receive the Právo Audience Award as it went to his thirty-year old movie Rain Man. Levinson further received the Crystal Globe for Outstanding Artistic Contribution to World Cinematography at the Closing Ceremony. “This is really a wonderful festival and an incredible experience for us. And also an extraordinary honour for a boy from Baltimore to be now granted an award for outstanding artistic contribution to world cinema here in the Czech Republic. Film is an artistic form that interconnects the whole world. While differing feelings drive us apart, we should bear in mind that we are in fact all quite similar,” the director expressed his gratitude.

Two popular actors, one Czech, Jaromír Hanzlík, and one British, Robert Pattinson, accepted the Festival President’s Award. “I have always wanted to come to this Festival as so many filmmakers told me how wonderful it was. The more the film industry changes, the more important festivals such as the one in Karlovy Vary become. The reason is that they give voice to films with rather low promotion, and that is the kind of films I want to make”, revealed Pattinson. “Through this award, you have welcomed me into the community of wonderful people and artists and I really appreciate this. However, apart from you, I would also like to express my thanks to the audience as they are the reason for all my work,” said Jaromír Hanzlík while accepting the award from the hands of Jiří Bartoška.

The 53rd Karlovy Vary International Film Festival attracted 13,080 accredited visitors, of which 10,857 festival-pass holders, 403 filmmakers, 1,190 film professionals and 630 journalists. A total of 501 film screenings were held and 140,135 tickets sold during the Festival. The Festival showed 236 films, of which 181 fictions (143 feature-length and 38 short films) and 55 documentaries (of which 35 feature-length and 20 short films). The next, 54th Karlovy Vary International Film Festival will take place from 28 June to 6 July 2019. 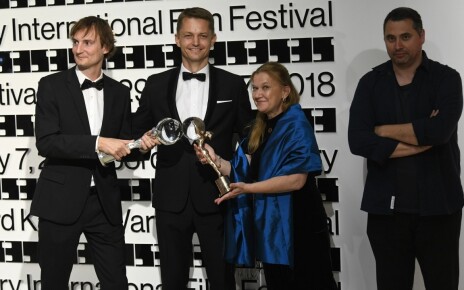