KVIFF Eastern Promises industry platform unveils 29 selected film projects, which will be showcased at the Works in Progress, Works in Development - Feature Launch, and  First Cut+ Works in Progress online presentations. The most promising projects will receive  awards  in a total value of 115,000 EUR.

The showcasing of projects to industry professionals will take place online before the festival, from July 28 to August 12:

All showcases start at 14:00 CET. In order to attend this year’s online presentations, film industry professionals must register via this form.

For Works in Progress, a total of twelve fiction and documentary feature films in the late stage of production or post-production from the countries of Central and Eastern Europe, the Balkans, the former Soviet Union, the Middle East, and North Africa have been selected. The following projects will compete for prizes in a total value of 100,000 EUR:

And His Brothers (Russia, Germany, Belgium)

In the Name of the Mother and of the Father (Romania)

An Owl, a Garden and the Writer (Iran)

Works in Development - Feature Launch is a platform organised as a collaboration between KVIFF, the MIDPOINT Institute international script development program, When East Meets West co-production market and Trieste Film Festival. The following nine projects, which have been developed within the Feature Launch program and are now looking for co-production partners, will compete for the 10,000 EUR Development Award:

First Cut+, a market support program focusing on Central and Eastern European feature films, will be showcasing eight projects that previously participated in one of the First Cut Lab editing programs:

A Piece of Sky (Switzerland, Germany)

Valeria Is Getting Married (Israel, Ukraine) 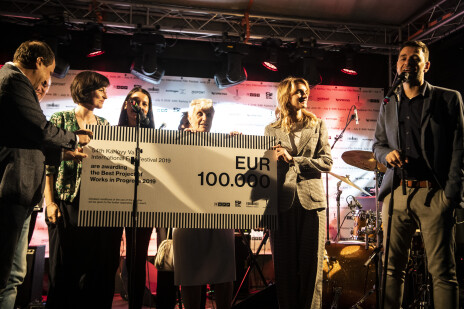