The opening ceremony was traditionally opened by a performance choreographed by the Caban brothers, whose twenty-five years at the festival is mapped by the new book VARY25. Then the festival President Jiří Bartoška welcomed the audience to Karlovy Vary and Marek Eben, the traditional moderator of the Karlovy Vary ceremonies, introduced the jury of both competition sections.

The opening film was the biographical drama Zátopek, produced by the festival's Executive Director Kryštof Mucha. Director David Ondříček and actors James Frecheville, Martha Issová and Václav Neužil took the stage with him. "This is the holy grail of Czech cinemas for me. We really looked forward to it," the director said.

The stage ultimately belonged to the notable British actor Sir Michael Caine, who accepted the Crystal Globe for the Outstanding Artistic Contribution to World Cinema. “This is the biggest applause I've ever had. And it's also the heaviest award I've ever encountered in my life. When I look back on my life, and this is an award for lifetime success, I recall how I started as a nobody from nowhere who knew nothing. And I was just wandering aimlessly and gradually achieved something, God knows how I did it. I was just vey very lucky. I've always been very happy doing what I'm doing. And now I have all these life-time achievemens. So what you have done for me is amazing. Because you have given me an award for something that I love dearly - my life.”

Then Jiří Bartoška declared that the 55th festival has begun. 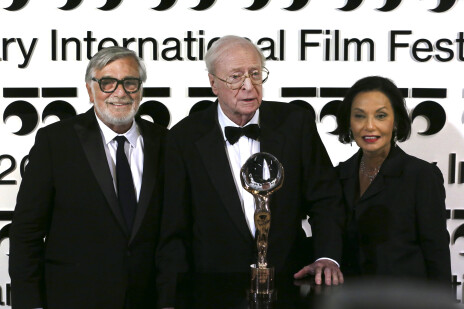