Both competitive sections of the Karlovy Vary Festival will be commencing on Saturday. Four world premieres will be presented today in the Crystal Globe Competition and in the East of the West section.

Starting this year, documentaries can also compete for the Crystal Globe. One will also be opening the Crytal Globe Competition. Every Single Minute, the new work by Czech documentary director Erika Hníková, records the upbringing of a four-year-old boy whose parents have done everything for him to become a top athlete and a perfect all-round person. You will be able to see the film for the first time today from 5 p.m. in the Grand Hall.

An understated love story by the German director Lisa Bierwirth, Le Prince, which tells of the ambiguous nature of love and the impossibility of overcoming it through reason, will enter the Main Competition today at 8 p.m. in the Grand Hall. Her main protagonists are a curator and an immigrant from Congo, who meet during a police raid in a bar.

The East of the West competition, dedicated to films from Central and Eastern Europe, the Balkans, the former Soviet Union, the Middle East and North Africa, is also starting. The first of these will be the Georgian film Otar's Death, a story of two families dealing with different existential difficulties, brought together by an unfortunate event, which we can see in the Karlovy Vary Municipal Theatre from 4 p.m. The début from Ioseb “Soso” Bliadze analyses the impacts of the event on each of the affected people without descending into accusations and moralising.

Runner, the dynamic drama by Lithuanian director Andrius Blaževičius, takes place over the course of 24 hours, during which the young Marija tries to find her boyfriend in the streets of the city in order to prevent a tragedy. The film, with this year's Shooting Star from Berlinale Žygimantė Elena Jakštaitė, will premiere at 7 p.m. at the Karlovy Vary Municipal Theatre. 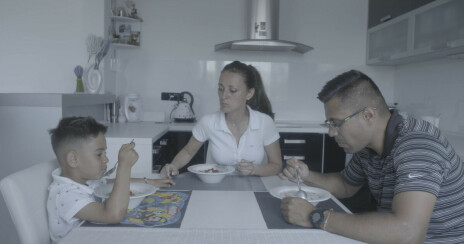