Georgian director Levan Koguashvili introduced the European premiere of his work Brighton 4th at KVIFF. "For me this is a very special festival because my last two films were essentially born in Karlovy Vary," admitted the director. "One of them got an award as part of the Works in Progress programme, the second didn't, but we found a producer here in Vary, thanks to whom it could be made. For me Karlovy Vary is one of the most interesting festivals in Europe and indeed the whole world," he added.

The plot of his most recent work, which won an award at the Tribeca Festival, is set in the streets of New York, specifically Brooklyn's Brighton Beach neighbourhood – a place where immigrants from the former Soviet Union have found refuge, where languages and ethnic groups mix and people's memories and nostalgia for their homeland mingle with their current woes. "New York is a matter of the heart for me in the sense that I watched my first films there and read my first important books there. For me this film is a way for me to give something back to New York creatively," said the Georgian director in thanks to the city for inspiration. 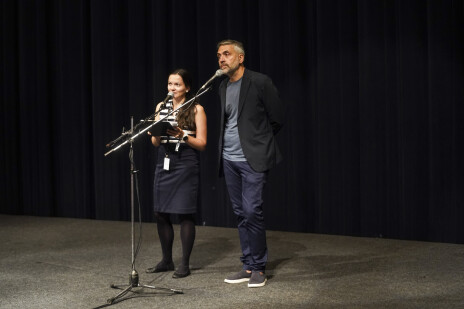