News KVIFF Talk with Jude and Loznitsa: Ideas don't come to you themselves

British journalist Neil Young started off the KVIFF Talk with directors Radu Jude and Sergei Loznitsa with some statistics. "Sergei Loznitsa's first film had its premiere in 1996 and so far he has made thirty films. Radu Jude has produced twenty-four works since the year 2002," the moderator informed the audience. "You have to know what you want and you have to start doing something regardless of if you have the money," explained Loznitsa as to why he has so many titles to his name. At KVIFF he is accompanying the documentary Babi Yar. Context, which was first shown at Cannes this year.

Both filmmakers agree that the most important thing for filmmakers is general education and the work itself. "The last three years I've been teaching at a new film school in Cluj. I was surprised that a lot of people go there because you don't have to do as much at film school. And when I assign them writing a screenplay for a short film in three months, they complain that they don't have any ideas. It seems to me, though, that it's easier to find ideas when you work, they don't come to you by themselves," thinks Radu Jude. Sergei Loznitsa agrees: "Our brains have become lazy, we are too comfortable." 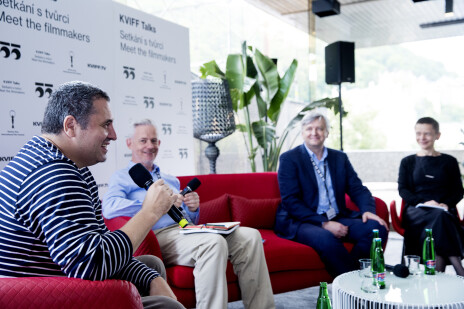