"Shane MacGowan is one of my heroes, a musician and a poet who people will still be reading a hundred years from now," declared Johnny Depp in Karlovy Vary. It is a documentary about this legendary punk figure, Crock of Gold: A Few Rounds with Shane MacGowan, that has brought the famous American actor and producer to KVIFF along with its director Julien Temple, protagonist and MacGowan's wife Victoria Clarke and producer Stephen Deuters.

The documentary was followed by a discussion with the filmmakers, which was introduced by festival Artistic Director Karel Och. In it, the audience learned among other things how Johnny Depp got to know the Pogues frontman. "We met at the recording studio. Shane was sitting on a pool table, a guitar in one head, a pint of beer in the other, and I didn't know whether he was saying hi or throwing the beer at me. He's a pretty unpredictable guy," said Johnny Depp, adding a story of how he broke a bottle of wine on the mixing board while Shane was recording his first solo album.

According to Julien Temple, the film also serves as a kind of demonstration of what all it is possible to experience in a single life. "I think Shane is happy the film is being screened here. He loves Czech Republic, Prague and especially Czech beer," Victoria Clarke divulged. At the end of the discussion, she and the director recorded a video with the ovations of the Karlovy Vary public for her husband. 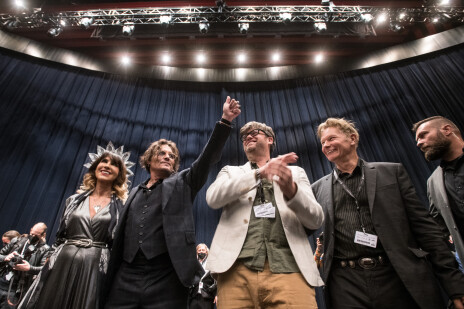