Even on the last day of the festival you can go not only to the cinema, but also to a wide range of accompanying events.

One of the most interesting ones starts at 11 a.m., when Ethan Hawke sits down with the audience in the Congress Hall for a KVIFF Talk. During the festival, Hawke presented Paul Schrader’s thriller First Reformed, in which he magnificently portrayed a priest going through a crisis of faith. The British film journalist and curator Neil Young, a contributor to the Hollywood Reporter, Sight & Sound and Screen International, will be the moderator.

Another of the many big draws of today starts at 1 p.m. in the Karlovy Vary Municipal Theatre, where Johnny Depp will be presenting the film Minamata, in which he plays the starring role. The film tells the story of a formerly sought-after photographer, Eugen Smith, who lives as a recluse and is never far from the bottom of a bottle. But an unexpected trip to the Japanese city of Minamata, where an unscrupulous corporation has been polluting the coastal waters, will bring new meaning to his life.

An hour earlier, at 12 p.m., you will be able to meet Jan Svěrák in the nearby Czech Television House. At the 55th KVIFF you could have seen his film Ride.

The culmination of the evening and the entire festival will be the closing ceremony with the participation of Johnny Depp, Ethan Hawk and Jan Svěrák. On this occasion, Hawke and Svěrák will receive the Festival President's Award directly from Jiří Bartoška. You can watch the arrival of the main stars and other guests on the red carpet in front of the Thermal Hotel starting from 4 p.m. on KVIFF.TV. The ceremony will also reveal the winners of this year's Crystal Globe Competition and the East of the West Competition.

In addition to all that, the extensive accompanying programme will be continuing. You can find more information about it here. 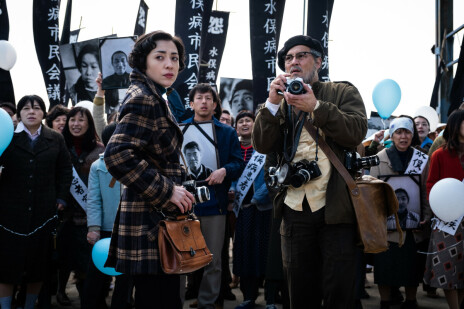