News The film Joke in a restored version is beautiful, topical, and short

Every year, the KVIFF offers to the audience Czechoslovak classics not only on the big screen, but also in a digitized and restored version. This year brings the film Joke directed by Jaromil Jireš in collaboration with Milan Kundera, the author of the adapted novel, in 1968, which was banned by the communist regime soon after its first screening.

On the stage of the Grand Hall, the host Marek Eben welcomed Eduard Kučera, who has co-financed the restoration of the classic films together with his wife Milada for eight years. When asked why, Kučera gives a different answer each time. Today, he noted that ‘these films are surely beautiful and important, but also short.’ Kučera saw Joke in the cinema in the late 1960s, and finds two main topics in the film: ‘It shows how a mountain is made out of a molehill, and how delayed revenge leads to terrible consequences’.

Acknowledgment also went to Michal Bregant, the Director General of the National Film Archive, who is responsible for the restoration in cooperation with UPP and Soundsquare. Marek Eben concluded by reminding us that the film ‘reveals an essential element of all totalitarian systems – they lack a sense of humour.’ But that is certainly not the case of this sharply satirical film. 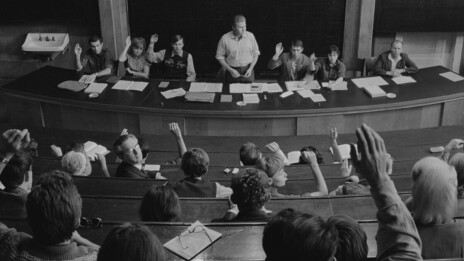