The debonair Geoffrey Rush reminisced about his rich and award-winning career during his KVIFF Talk. He spoke of his breakthrough role in Shine, after which he was offered roles involving a piano, the clash between censorship and freedom of speech in Quills, a film about Marquis de Sade, and the King's Speech, which he said helped not only stammerers but also naturally shy people to be more courageous in communicating with others.

In addition to these character roles, he spoke of his more comedic roles in the Pirates of the Caribbean franchise. In particular, he mentioned a very specific collaboration with monkeys: "They were great colleagues, but I was required not to befriend them – otherwise, during an important scene, they would start picking insects out of my hair. That's why I had to communicate only with their trainer. Nevertheless, at the end of the shoot, one of the monkeys drew me a picture. It's as good as anything by Jackson Pollock," the charismatic narrator entertained the audience at the Congress Hall.

In a similar vein, he recalled the film Les Misérables from 1998: "My first foreign film was shot in the Barrandov studios and also somewhere near a place called Brno," the actor amused the audience, to his own surprise. "There is no word in the English language with the letters B, R and N behind it, it's impossible," he mentioned the pitfalls of filming in the Czech Republic, adding that one of the most difficult Czech words for an English-speaking person is "čtvrtek" (Thursday). 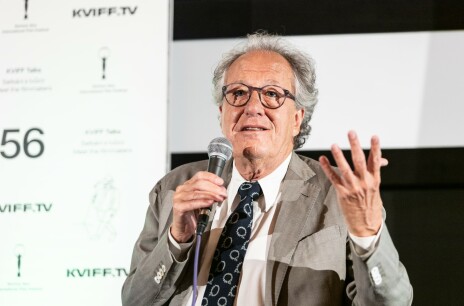