In a packed Grand Hall, Geoffrey Rush presented Shine – the Academy Award-winning film which unexpectedly made him a star. The drama about the life of mentally troubled musical genius David Helfgott also earned six more Oscar nominations, something no Australian film has managed before.

In his introduction to Shine, Rush also reminisced about the history of Australian cinema. He quipped that the Australian New Wave came already in 1911, as that year saw an unrivalled 51 productions. However, from the 1930s to the 1970s, production ceased due to the import of Hollywood films. In the 1970s, the early years of Rush’s career, film production picked up again, but the actor mostly pursued theatre.
​
“In my twenties and thirties, I focused on Shakespearean roles. Not the big, dramatic ones, but rather the characters of clowns, idiots and drunks. It was a bit autobiographical,” he joked. However, he was immediately captivated by the script about the life story of a troubled pianist, as the lead role was similar to what he knew from the theatre. “It took three years to raise the money to make the film, so I was able to study David in detail and learn to play the piano.” 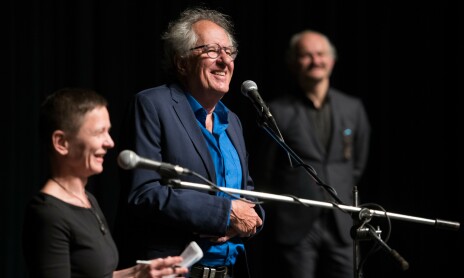