News Tim Sutton on Cobain, darkness and leaving the cinema

American director Tim Sutton presented his film Taurus to a packed Small Hall and then answered questions from Šimon Holý as part of his KVIFF Talk. "I am fascinated by the local audience. Czech audiences are sophisticated, they bring great energy to the cinemas and they come to the movies in such numbers that I would like it if it were the same in the USA. I'll be watching this film with you, so if you leave before the end, I'll know it," joked the director.

"I was 24 years old when Kurt Cobain died. It affected me as it did my whole generation. Imagine making music that touches the sky, and yet you can't exist here on earth. I was intrigued by that," Sutton recounted at a subsequent discussion about the film, whose fast-track production was aided by the musician Colson Baker, better known as Machine Gun Kelly. The drama about the rapper's drug addiction and his inability to form healthy relationships is entirely fictional, but during filming it became clear that Baker had actually experienced some of the situations. "His entourage advised him not to make this movie, but he said he had to. He wanted to explore a darker part of his personality."

"Actors have the power"

"I could write the best script in the world, but if the project doesn't have a well-known actor behind it, it's not worth it. Actors have a lot of power," the director explained the behind-the-scenes of the film industry during the KVIFF Talk that followed, highlighting his experience as an independent filmmaker. Working with small budgets and often non-actors, he said, it is imperative to focus on the message.

"My films are mislabeled as dark, but I think they're just serious," mused Sutton, who wouldn't mind working with Netflix or Marvel. In his view, they represent opportunities to try to create something personal in the production wheelhouse – and, of course, to provide for a family. 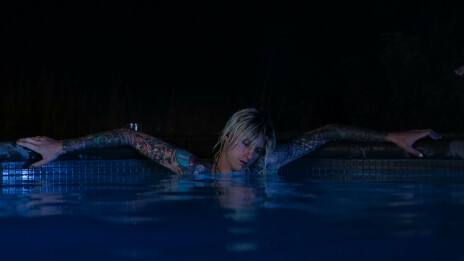