News The Crystal Globe goes to Bob and the Trees, a story of an American logger

Charming American feature film Bob and the Trees, where the main character, logger and rap fan Bob Tarasuk, plays himself, was awarded with the Crystal Globe at the 50th anniversary Karlovy Vary Film Festival. Tarasuk accepted the Festival Grand Prix in person, together with director Diego Ongaro.

“This really is a surprise. We had virtually no money to shoot the film so I had to invest my and my wife’s money, and I would like to thank everybody involved in making the film” stated director Ongaro, noting that he still has not found a distributor. Bob Tarasuk, too, expressed his amazement: “I have never won anything so far. Indeed, I have never left the States before, but my grandmother was Czech and my grandfather Ukrainian so I dedicate this award to them.”

Czech films included in the Competition succeeded thanks to the actors. Alena Mihulová received the Best Actress Award for her portrayal of a dedicated nurse in Slávek Horák’s debut Home Care and Kryštof Hádek received the Best Actor Award as the problematic younger brother in the drama The Snake Brothers directed by Jan Prušinovský.

The Special Jury Prize was granted to Austrian director Peter Brunner for the film Those Who Fall Have Wings, a drama on coming to terms with the death of a loved one. Kosovan Visar Morina received the Best Director Award for his film Babai, a story about a small boy setting off on a journey to find his father. The jury also awarded two Special Mentions to animated biography The Magic Mountain, directed by Anca Damian, and the drama Antonia, a tragic story of the Italian poet, respectively.

The prize for the best film of the East of the West Competition was awarded to social drama The Wednesday Child by the Hungarian director Lili Horváth, a tale of a young girl who wants to secure better circumstances for her child than she had. A Special Mention was awarded to Romanian film The World Is Mine.

The Grand Prix for Best Documentary Film went to Helena Třeštíková for her latest long-term documentary Mallory. The jury also awarded a Special Mention to Austrian film The Father Tapes. The prize for the best documentary film up to 30 minutes in length was awarded to White Death, a story of a Chilean military company trapped in the snow told using a variety of formats and animation techniques. The Special Mention in this category was granted to Women in Sink, a visit to an Israeli beauty salon. The Forum of Independents Award went to American transgender comedy Tangerine, shot by director Sean Baker on an iPhone 5.

Popular actress Iva Janžurová was awarded with The Festival President’s Award, an Honorary Mention for her fundamental contribution to the Czech cinematography, at the closing ceremony. “I promise that this award will not mean the end of my acting career,” noted the moved actress, thanking all her colleagues, the audience and fans. 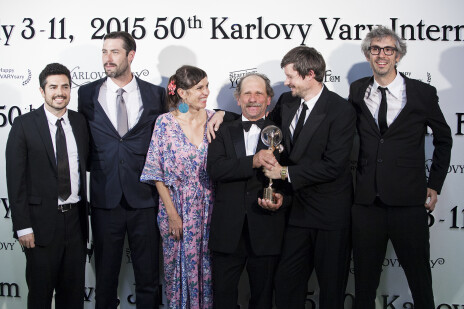