News Uma Thurman on the talk show “At the Pool”

Uma Thurman began her acting career when she was very young, but she remembers with a smile some moments from a time when she still had nothing to do with the acting profession. “When I was twelve I got my first job. It was at a Chinese restaurant washing dishes. But they fired me as soon as they found out how old I was,” she revealed.

Eben immediately jumped from her childhood to her cooperation with top-notch directors. “I was scared of Woody Allen, having heard a lot of horror stories about him. I was then surprised at what a direct, straightforward person he was. He always filmed everything in one take. We were home by 1 p.m.,” said Uma Thurman about her cooperation with this director. She noted about Lars von Trier that: “He was wild. Very wild. And he liked hearing people say that about him.”

At the end of the talk show, Uma Thurman revealed that she was about to make her Broadway debut in the political comedy The Parisian Woman by House of Cards screenwriter Beau Willimon. This will be reminiscent of her role in the film version of Les Misérables by director Bill August, which she filmed in the Czech Republic, or her role in the 2005 film version of the musical The Producers. 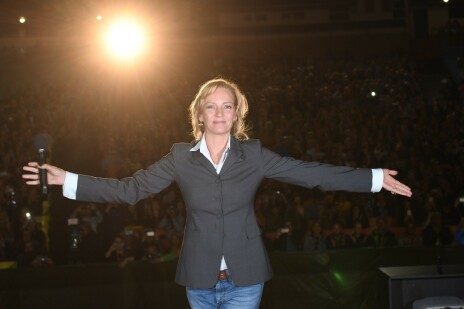