Adam Sedlák won the Film Foundation Award at the Karlovy Vary Film Festival a few years ago for his first screenplay for the film Domestique. Now he has entered his visually impressive film debut into the main competition. The heavy psychodrama follows a married couple: a cyclist obsessed with his performance and a teacher obsessed with getting pregnant. “After the Karlovy Vary Festival, I was relaxing and watching the Tour de France, and it got me interested in how cyclists function and how they prepare themselves. My idea was to make a minimalist film where the scenes would repeat and vary each time,” reconstructed Sedlák the beginnings of the film.

The first version of his picture was even more radical than the resulting one. “The last version is a pop-like as it can be,” thinks the director, who had been most inspired by one of Chantal Akerman’s films from the 1970s, He found information about doping on the internet. “There’s a lot of information out there after the Lance Armstrong scandal,” he adds. He put Miroslav Hanuš in the role of the dubious doctor. “I would have taken the role even for free, as I don’t agree with sport and today’s adoration of performance. For this reason, Domestique is for me a film criticising society, even though it mainly takes place in a flat,” said the actor.

Jiří Konvalinka played the role of the domestique, which in cycling jargon means a rider who sacrifices himself for the team. Konvalinka learned to ride a racing bike for the role. “I enjoyed the physical preparations. It also gave me insight into the character. Cyclists are very open. They spoke to me about doping and about the fact that a cyclist in his best form is essentially on the verge of being sick,” said the actor.

Konvalinka and his band Vložte kočku also made the music for the film. “I wanted it not be clear when sound is commotion and when it is music,” said Sedlák, who indicated that he had to bring the band in line a bit, so that the accompanying music mainly served the film and didn’t sound too authorial. “It was a little strange making music and watching yourself while doing it, but the whole thing was very interesting,” said Konvalinka in praise of the collaboration. 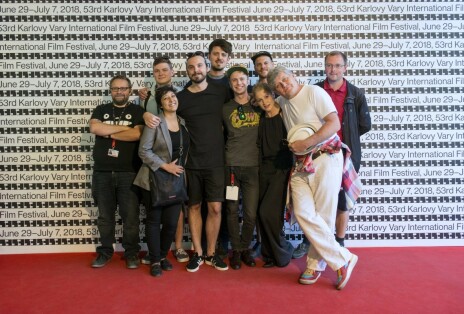