News Polish actress on the role of a fitness influencer

The Polish/Swedish drama Sweat about the impact of social media on the life of an individual could have been screened in Cannes last year if there had been no pandemic, or in the autumn in Karlovy Vary at the 54½ event, if there had been no pandemic. Ultimately, Karlovy vary visitors saw it in August at the 55th festival. The starring actress Magdalena Koleśnik personally introduced it.

She played fitness instructor and influencer Sylwia in the film, so she had to train for more than a year for the role. "As a teenager, I suffered from eating disorders. This project cured me in a way. I gained weight thanks to it, and for the first time in my life I wanted to have female curves,” the actress confided. She also revealed that she created an Instagram account thanks to the film, where she sometimes posts quite risqué photos. "I want to show that my body belongs to me and I can show it off however I want, which is still controversial in Poland.”

When preparing for the film, she also discussed a lot with Swedish director Magnus von Horn, and Sylwia was born out of their personal experience and opinions. “She became the closest person to us, we lived with her, we gave her dreams and taboos,” Magdalena Koleśnik explained at the debate following the film. 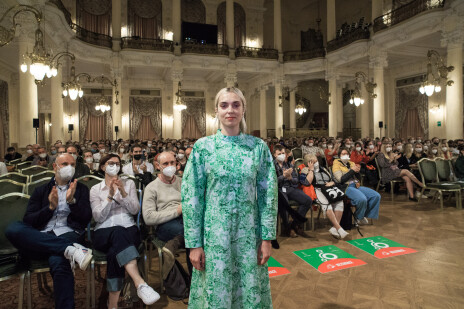