The first day of the 56th KVIFF will start at 8:30 a.m. with the thrilling Mexican-American film The Box. We will present it in the Horizons Section, which is our selection of the most resonant titles from international film festivals, including Cannes or Venice. From that moment on, you can watch films of all genres and lengths in twelve cinemas all around Karlovy Vary.

In addition to the film programme, we would like to invite you to the opening of the Rohlik zone in the Smetanovy sady park, which will start at 1:45 p.m. Come and see the new festival centre KVIFF.TV Park, located next to the Thermal Hotel. We are opening at 2:00 p.m. – come by for a good coffee or an opening drink! The evening at KVIFF.TV Park will start at 8:00 p.m. with DJ Smeghouse, who will be followed by DJ Telly Savalas.

We will officially open the festival in the afternoon – at 4:00 p.m., we will welcome film guests from the Czech Republic and abroad on the red carpet in front of the Thermal Hotel. Jiří Bartoška, President of the KVIFF, will also be present. The subsequent opening ceremony in the Grand Hall of the Thermal Hotel will be followed by a screening of the Italian romantic tragicomedy Superheroes. You can watch the red carpet and the opening ceremony live on KVIFF.TV.

The highlight of the day will be SymfoMIG, a unique concert of the band MIG 21 with the Orchestra and Choir of the Czech National Theatre under the direction of conductor Jaroslav Kyzlink. The concert will start at 10:45 p.m. in front of the Thermal Hotel and will be also broadcasted live on KVIFF.TV. You can look forward to the band’s most famous hits in a new arrangement and also to a festive fireworks display that will light up the Karlovy Vary sky after the concert.

The entire accompanying program of the festival can be found here. 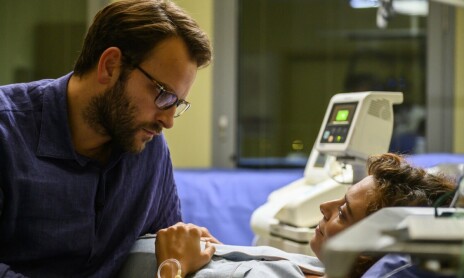