KVIFF Eastern Promises, the festival's Industry section, has the exciting mission of bridging the gap between talented filmmakers and their potential partners, festivals and audiences. “This year brought us back to live pitching sessions after two pandemic years, and we were delighted to see the return of both our industry audience and the well-prepared creative teams to a true brick-and-mortar cinema," Hugo Rosák, the Head of the KVIFF Film Industry Office, commented.

A total of 35 film projects were screened within the festival's three established programs (Works in Progress, Works in Development – Feature Launch and First Cut+) and the Odesa IFF Works in Progress selection. This showcase was held in Karlovy Vary instead of Odesa as a gesture of support towards the Ukrainian film industry impacted by Russian aggression. The winners of this year’s selection are:

Works in Progress encompasses both fiction and documentary films under one program, as both these categories, despite their differences, possess the same artistic value. In this year’s showcase, a total of ten feature and documentary projects from countries in Central and Eastern Europe, the Balkans, the former Soviet Union, the Middle East and North Africa were presented.

The jury has chosen the film The Burdened (Yemen, Sudan) directed by Amr Gamal and produced by Mohsen Alkhalifi, Amr Gamal, Amjad Abu Alala and Mohammed Alomda. The award consists of post-production services in UPP and Soundsquare.

The jury is impressed by the director’s brave approach to tackling this sensitive subject against all odds.

The jury has chosen the film Windless (Bulgaria, Italy) directed by Pavel G. Vesnakov and produced by Veselka Kiryakova, Alessandro Amato and Luigi Chimienti. A cash prize of 5,000 EUR from TRT Cinema will be awarded to the project.

For its strong artistic vision, mature directing and meditative way of storytelling, which creates a mirror for the viewer.

The jury has chosen the film Endless Summer Syndrome (Turkey, France) directed by Kaveh Daneshmand and produced by Gem Deger, Eva Larvoire, Cédric Larvoire and Kaveh Daneshmand as the winning project. A cash prize of 5,000 EUR from KVIFF will be given to the project.

The jury appreciates how the film pushes the boundaries of modern society and questions family love. We believe in the film’s audience potential.

The jury decided to give a special mention to this film, as it touches on the subject of immigration in a very unconventional and intriguing way. We consider the film to be fully accomplished and have no doubt that quite soon the finished film will travel the festival circuit.

For this award, KVIFF has partnered with the Midpoint script and project development program as well as with the When East Meets West co-production market and Trieste Film Festival. Together they have showcased nine projects that have gone through development and mentoring within the Feature Launch program. The jury has decided to award the 10,000 EUR cash prize for further development to My Best Friend's Baby (Sweden) directed by Sophia Vuković and produced by Eliza Jones and Markus Waltå.

Although the level of the projects in development was quite high this year, the jury was, in the end, convinced by the clear vision of one of the creative teams. Their take on queer parenthood and culture clashes is specific yet universal, and, last but not least, it's fun! The KVIFF & MIDPOINT Development Award goes to the project My Best Friend's Baby.

The jury, consisting of Marjorie Bendeck and Katharina Stumm, has awarded the film Dolphin (Poland) directed and written by Sonja Orlewicz-Zakrzewska and produced by Magdalena Sztorc. The project will be granted the opportunity to pitch at Connecting Cottbus, the East-West co-production market during the FilmFestival Cottbus.

Congratulations to all of the exciting filmmakers that were part of MIDPOINT Feature Launch this year. We have chosen a project that talks about the struggle for personal happiness and self-fulfilment in a unique and quirky way, a struggle that is best faced with a little help from an aquatic friend.

The juror Inke Van Loocke has awarded Magdalena Sztorc, producer of the film Dolphin (Poland). The winner will participate in the Rotterdam Lab professional training program for producers, which takes place during International Film Festival Rotterdam.

The MIDPOINT projects represent a very inspiring new generation of filmmakers, writers and producers. Magdalena Stztorc demonstrated a collaborative spirit, thinking beyond borders. She stood out as a true creative producer who can support the artistic vision behind the project in a unique way. We look forward to welcoming her to Rotterdam Lab.

First Cut+ is a programme created for boosting the competitiveness and marketability of feature films that previously participated in First Cut Lab. The programme was launched in 2020 through close cooperation with two dynamic and well-established film industry platforms: Trieste’s When East Meets West and Karlovy Vary IFF’s Eastern Promises Industry Days. Each year, it promotes a portfolio of 16 fiction feature films at the stage of post-production – eight of them were presented here in Karlovy Vary.

The jury has chosen the film The Maiden (Canada, USA) directed by Graham Foy and produced by Daiva Zalnieriunas and Dan Montgomery as the winning project. A cash prize of 5,000 EUR from TRT Cinema will be given to the project.

The jury is very happy to reward “The Maiden”. This movie succeeded in bringing to screen the intense energy of youth and delicately capturing the idea that time and space are witnesses to our memories. It also remarkably answers the question of what we are supposed to do with our pain and sorrow, by showing us how to turn mud into gold, which is the very meaning of art and cinema.

In full support of Ukrainian filmmakers and festival organisers, this year's KVIFF hosted the Works in Progress programme of the 13th Odesa International Film Festival, which cannot be held there because of Russian aggression. Eight full-length film projects in the final stage of shooting or in post-production produced in Ukraine or in co-production with Ukraine, selected by the OIFF selection committee, were presented by their creators. The jury has chosen the film U Are the Universe (Ukraine) directed by Pavlo Ostrikov and produced by Volodymyr Yatsenko and Anna Yatsenko as the winning project. A cash prize of 10,000 EUR from Barrandov Studio will be given to the project.

The jury finally agreed that the winner will be the project U Are the Universe. We were convinced by the whole team’s very good presentation. We highly appreciated the genre of the film, the acting, and the directing. The jury feels great potential in the whole project. The jury also appreciated the author's statement, in which it defines the character of the film exactly while also attracting potential viewers to see it. If there is one certainty in the world, it is realising “how important it is to find someone who understands you”, and that's something that no jury is going to question at all. 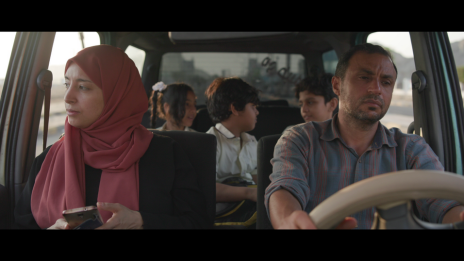