KVIFF Eastern Promises Industry Days unveils 41 selected film projects, which will be presented at Works in Progress, First Cut+ Works in Progress, Docs in Progress, Works in Development - Feature Launch and Eurimages Lab Project Award. Presentations of projects to industry professionals will take place on Monday, July 6, Tuesday, July 7, and Wednesday, July 8, and the most promising projects will receive awards of the total value of 165.000 EUR.

A total of eight projects were selected for Works in Progress from the countries of Central and Eastern Europe, the Balkans, the former Soviet Union, the Middle East and North Africa. The films are in the post-production stage. You may view these projects here. Additional eight Works in Progress projects will be introduced thanks to the First Cut+ program, showcasing projects that previously participated in First Cut Lab programs. You may view the portfolio here. The prize will be decided by jury members Vanja Kaludjerčić (IFF Rotterdam), Gabor Greiner (Films Boutique), and Faruk Güven (TRT). The sessions will be presented online on Monday, July 6 at 14:00-17:00 and Tuesday, July 7 at 14:00-17:00.

Eight projects were selected for Docs in Progress, introducing documentary films from the countries of Central and Eastern Europe, the Balkans, the former Soviet Union, the Middle East and North Africa. They are in late production stage or in post-production. More information about the projects can be found here. The prize will be decided by jury members Salma Abdalla (Autlook), Rada Šešić (film consultant and curator) and Charlotte Cook (Field of Vision). ​The session will be presented online Wednesday, July 8 at 14:00-16:30.

Works in Development - Feature Launch is platform organised in collaboration of MIDPOINT Institute, an international script development program, co-production market When East Meets West and Trieste Film Festival and the KVIFF. Nine projects, developed within this Feature Launch program will be presented online and are now looking for co-production partners. You can view the projects here. They will compete for 10.000 EUR Development Award. The session will be presented online Tuesday, July 7 at 10:00-12:00.

Eurimages Lab Project Award will showcase eight projects in production or post-production stage, each transgressing the borders of traditional filmmaking. The best project, selected by international jury comprised of Els Hendrix (Eurimages representative), Adina Pintilie (film director) and Mark Peranson (Berlinale) will receive an award of 50.000 EUR. More information about the projects can be found here. The session will be presented online Wednesday, July 8 at 10:00-12:00.

In order to attend this year’s online program, film industry professionals must be registered by June 22, 2020 at the latest. The registration form can be found here. 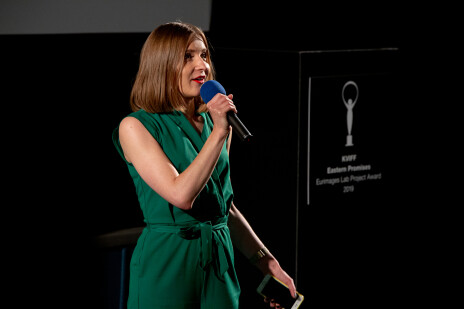